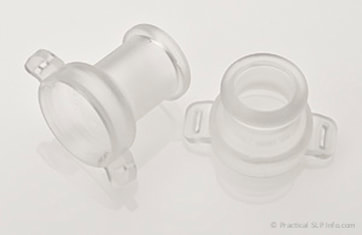 The Larybutton is a self-retaining intrastomal device that can supply stomal support, similar to a Larytube, although is most commonly used as an alternative to the adhesive housing. The Larybutton cannot be used by all patients and the SLP staff will determine if you are an ideal candidate for this device.

If you have been prescribed a Larybutton, the SLP staff will counsel you and demonstrate proper insertion techniques. Here are some helpful tips to successful Larybutton use:
​​

​Take the end of the Larybutton and fold it in the center, squeezing the end as much as possible.

​With larger diameter tubes, you may be able to fold into quarters. With the end folded, insert into the stoma, fully past the stomal edge, and release. 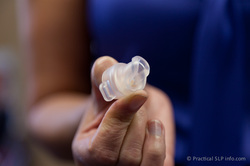 ​You may need to push the end out to fully release.
Powered by